Home-Events-Football-World Cup Groups, Teams, Schedule, and the Rest of It

World Cup Groups, Teams, Schedule, and the Rest of It 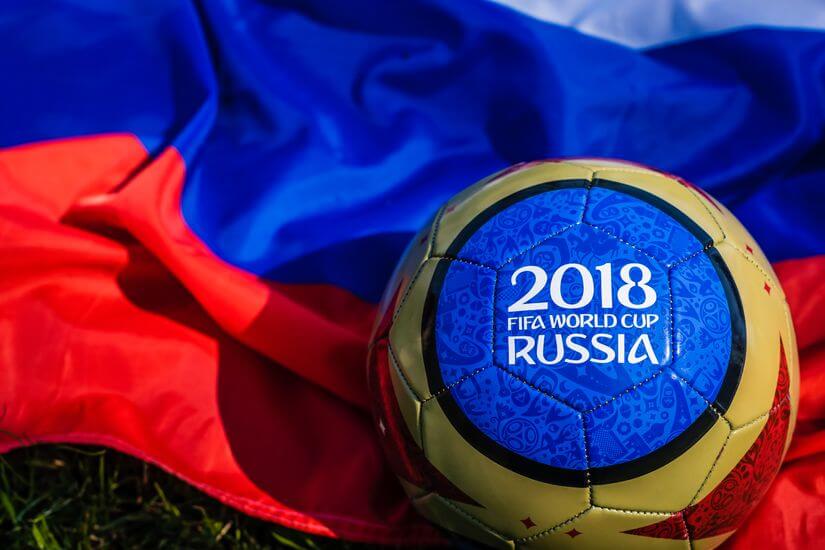 If you are a real sports fan, you’re sure to know that FIFA World Cup is one of the most expected sporting events worldwide. The 2018th season will become the 21st competition in the history of the contest, with the traditional amount of national football teams and the standard arrangement scheme. This year’s games will be conducted in Russia, as the country received the hosting rights in winter 2010. Based on the FIFA World Cup schedule, the matches will be played from the middle of June to the middle of July 2018. The Committee, responsible for the event, approved 12 venues for the games, including the ones in the capital of the country, St. Petersburg, Sochi, Kazan, Samara, Rostov-on-Don, Saransk, and others. The World Cup groups and teams will meet at the Fisht Stadium, Luzhniki Stadium, Spartak Stadium, and Krestovsky Stadium for several times.

Our today’s article is devoted to the competition’s draw, schedule, groups, and teams. You should know everything about this spectacular sporting event, and we’ll do our best to provide you with the most interesting and reliable data.

The draw or the seeding, as it is also referred to, is the schedule of fixtures for the forthcoming sporting event. The members of the Organizing Committee draw up the World Cup schedule in such a way that superior players don’t meet with each other in early rounds. This makes the contest more spectacular and, more importantly, fair, as the weakest teams get kicked out of the competition in its early stages, while the strongest ones get the opportunity to meet with the opponents of the same level.

This year’s World Cup draw was performed on December 1st, 2017. The experts of the Organizing Committee met at the Great Kremlin Palace and divided the competitors into four pots. Traditionally, the draw sequence was started with Pot 1 and finished with Pot 4, so that each group received one player from each Pot. Thus, the World Cup 2018 teams were divided into 8 groups, with 4 teams in each.

As distinguished from the previous editions of the tournament, this year’s Pot 1 included the highest-ranked players, the following Pot included the next highest-ranked players, and so on. The host nation entered, in accordance with the World Cup group tables, to Pot 1. Further, it was enlisted into Group A. We’ll tell you about the groups approved for this competition further, so that you could make your predictions concerning the results of the games in the light of the teams’ previous achievements and the level of training.

According to the final draw, this year, as usually, there are eight groups from A to H with four teams in each. Here, we will briefly describe all of them:

Group A. It includes the Russian Federation, Egypt, Saudi Arabia, and Uruguay. The total amount of point for this set of players is 2.991.

Group B. Here, the World Cup teams are the ones from Portugal, Spain, Morocco, and Iran. All in all, these national football teams have 4.128 points.

Group C. The stars of this “company” are France and Australia, though we shouldn’t write off Peru and Denmark. This group has a little more than 4 points.

Group D. Argentina, Iceland, Croatia, and Nigeria will fight for the title of the champ in this set of players. All of them have 4.099 points.

Group E. According to the FIFA World Cup 2018 schedule, it includes a very strong team from Brazil, as well as the ones from Switzerland, Costa Rica, and Serbia, with the total score of 4.415 points.

Group F. Here, Germany, Mexico, Sweden, and South Korea will fight for the chance to get to the final match. The total amount of points with these players is 4.151.

Group G. In this set of teams we have the UK, Belgium, Panama, and Tunisia. These contestants have gained the overall amount of 3.953 points.

Group H. The last, but not least: in this representative of the World Cup 2018 groups, Poland, Senegal, Colombia, and Japan will fight in a set of play-offs. Here, the total score is 3.944 points. 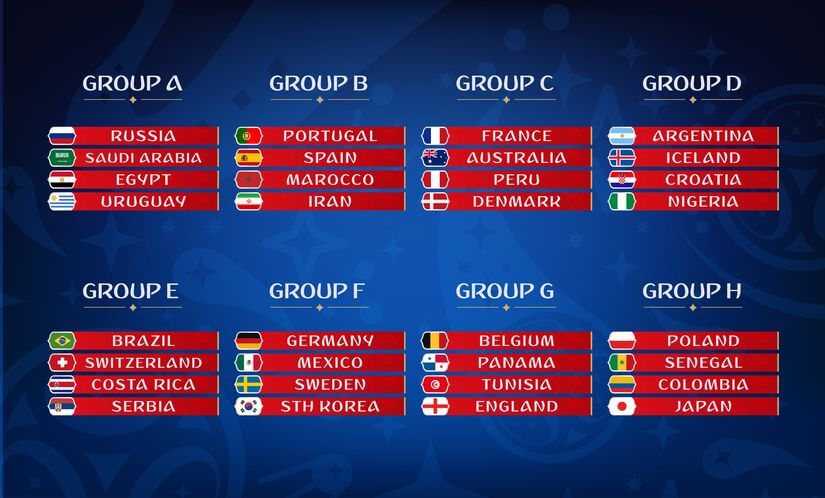 Here are some specialists’ speculations concerning each group and its players. We cannot say for sure that all of these predictions will come true; but why not read them on the threshold of the world’s greatest sporting event, especially since we have already discussed the World Cup qualifiers groups and their strongest players?

Group A. Russia will meet with Saudi Arabia on June 14th, while the final game in this group is scheduled for June 25th. According to football experts, Uruguay is an evident favorite in this set of World Cup 2018 qualified teams. Egypt will be a serious contender, too, though, it’s predicted to be only the second. As for Russia and Saudi Arabia, they are supposed to be the most unpredictable members of the World Cup groups.

Group C. According to World Cup fixtures, Group С will have France, one of the strongest competitors at this year’s contest. Specialists note that it will literally go on strike during the matches in order to came back home in triumph. Denmark, with Christian Eriksen and Niklas Bendtner is sure to be at least second, while Peru and Australia are happy just to show up at this world’s greatest contest.

Group D. Based on World Cup 2018 tables, we know that Argentina will meet with Iceland on June 16th, while Iceland will face Croatia on June 26th. Specialists believe that the strongest player of this quad is Argentina: it features one of the world’s best footballers, Lionel Messi, as well as Sergio Aguero, Gonzalo Higuain, and other promising athletes.

Group E. According to the World Cup qualifiers fixtures Costa Rica will meet with Serbia on June 17th, Serbia will play against Brazil on June 27th, and so on. Brazil, the evident favorite of the group, destroyed all of its opponents during the qualifying matches and is sure not to stop there. Serbia and Switzerland have very strong players, too, so the matches will be really tense.

Group F. Germany is the only favorite to win in the sixth of the World Cup 2018 groups. Mexico features Juan Carlos Osorio; this is why it’s also a very strong competitor. As for Swedish players, they seem to be organized and hardworking, and many specialists predict them to take the third place.

Group G. Here, the list of World Cup 2018 teams includes Belgium with talented, but inconsistent players, England with the same type of sportsmen, Panama with the athletes, who are simply happy to be qualified, and absolutely unpredictable footballers from Tunisia.

Group H. The eighth of the World Cup groups is no less promising than the previous ones. Poland with Robert Lewandowski and Senegal with Sadio Mane are very dedicated and talented competitors. The same can be said about Colombia featuring James Rodriguez, who is ready to repeat his 2014’s victorious game.

It’s hard to predict who of the World Cup 2018 tables will gain the upper hand. In any case, we will see it ourselves in summer 2018, at the greatest stadiums of Russia.