Home-Events-Football-World Cup 2018 Dates: When and Where to Watch the Competition

World Cup 2018 Dates: When and Where to Watch the Competition 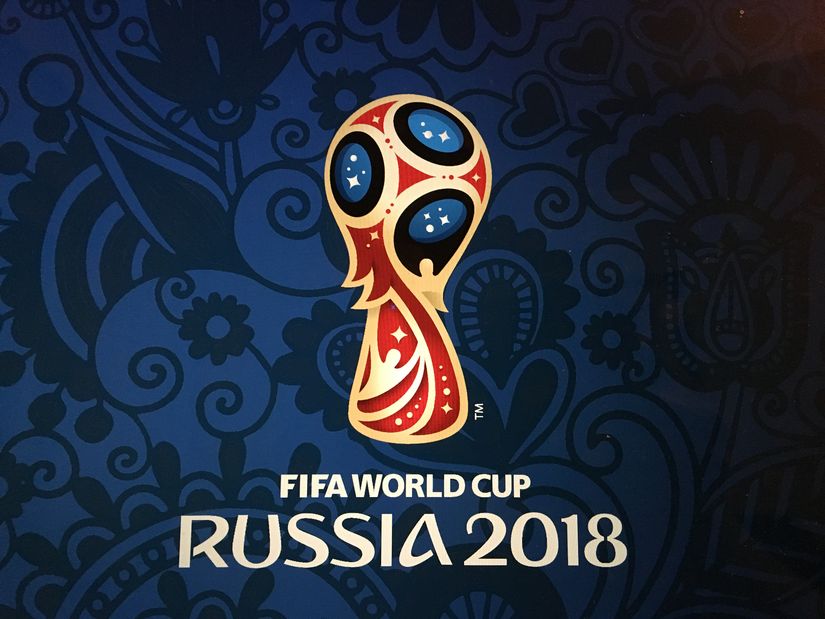 This year, the greatest sporting event – World Cup – will be conducted from June 14th to July 15th. All the matches will take place in Russia, as this country was selected as the host for the competition in December 2010. It will be the 1st season held in Europe since 2006, when the football World Cup location was Germany. Besides, this year’s games will be the 1st ever to be organized in Eastern Europe. It’s worth noting, that all the matches are scheduled to be conducted at the stadiums of European Russia, so that the sportsmen’s travel time would be as manageable as possible.

In this material, we will tell you about World Cup 2018 dates and the venues for the tournament. If you are going to watch this spectacular competition – and you just can’t miss out such an important sporting event – get ready to remember everything about the matches, the stadiums, and the dates.

The capital of this year’s season has offered the following host cities:

Thus, we have eleven variants of the World Cup 2018 location situated in the European part of Russia. Initially, the country offered also Krasnodar and Yaroslavl, but the Organizing Committee didn’t approve such an impressive number of cities. The amount of stadiums offered for World Cup 2018 is twelve. Three of them – Luzhniki in Moscow, Fisht Stadium in Sochi, and Central Stadium in Yekaterinburg – were completely renovated as part of the Preparation Program. The rest sports centers are absolutely new – they were built especially for the FIFA World Cup 2018.

The buildings were first inspected in 2014, when the Organizing Committee headed by Chris Unger made an official visit to Moscow, St. Petersburg, Sochi, and Kazan. The specialists assessed the level of readiness of the stadiums and got satisfied with the progress of their construction and renovation. One year later, the Committee formally approved the list of World Cup 2018 stadiums.

There are two stadiums – the Luzhniki in Moscow and the St. Petersburg Stadium – that will be used most, as they are the greatest sport centers in Russia. Each of them will host seven matches within the tournament. The FIFA World Cup 2018 stadiums in Sochi, Nizhny Novgorod, Kazan, and Samara will become the battle fields for six games apiece, while the Otkrytiye Stadium in Moscow and the ground in Rostov-on-Don are scheduled to host five matches apiece. The rest of the cities will have four games each, with none of them hosting knockout stage games. 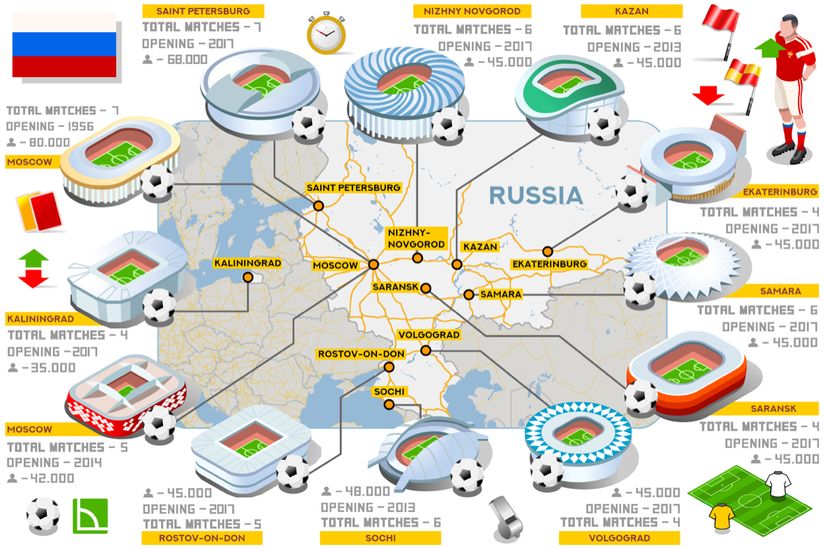 As we have already mentioned, the tournament will be held from June 14th to July 15th 2018. The detailed schedule of the event was announced by the Organizing Committee in July 2015. The timetable for the kick-off games was adjusted by FIFA in 2017. When is the World Cup? We’ve selected some of the most important dates of the competition, so that you wouldn’t miss the matches with your favorite team:

It’s also interesting to mention that some of the teams advance to knockout stage. According to the World Cup 2018 draw, the list of such teams includes Russia and Saudi Arabia (Group A), Portugal and Spain (Group B), France and Australia (Group C), and so on. As for the rest of World Cup dates, they are as follows:

Where is the World Cup 2018? Now that you know some of the contest’s dates, we’ll tell you a couple of words about the greatest stadiums that will host the matches.

Luzhniki Stadium. With the seating capacity of 81,000 spectators, this sport centre is the biggest one in Russia. It is situated in Khamovniki District and is considered to be the part of the Luzhniki Olympic Complex. In accordance with the World Cup draw and schedule, the final of the competition will be conducted at the Luzhniki Stadium on July 15th 2018.

Otkritie Arena. Known also as the Spartak Stadium, this Moscow multi-purpose sport centre is designed with a sitting capacity of over 45,000 people. It was opened in September 2014 in honor of the Russian football club “Spartak”, but named as “Otkritie” on the terms of the contract with the homonymous bank.

Krestovsky Stadium. Some of the World Cup 2018 games will be held in Saint Petersburg, at the Krestovsky Stadium, known also as Zenit Arena. It is situated in the western part of Krestovsky Island and has the sitting capacity of 67,000 spectators. The stadium is considered to be one of the most expensive sport complexes ever built, with the total cost of over $1.1 billion.

Fisht Stadium. It’s an outdoor sport centre in Sochi that will host six matches of this year’s FIFA World Cup. The building was constructed in 2013 for the Winter Olympic Games in Russia. After the competition the stadium was shut down; only in 2016 the country’s Government decided to re-open it as an open-air football stadium.