The Champions League, the world’s greatest football competition, is conducted every year by the UEFA and contested by the strongest European clubs. Sport fans from all over the Globe wait with impatience for this prestigious and spectacular tournament. In order to take part in Champions League matches the teams from the strongest national football associations have to win a number of qualifying rounds. Only then they get the chance to show themselves on the greatest stadiums of the world. It’s worth mentioning that the games of this level are broadcast in all countries with a record number of television viewers.
In this article, we’ll discuss Champions League fixtures, dates, games, and predictions. The latter will let you figure out what teams to select for your betting, so that you could gain the maximum benefit from each stake.

Everything about Champions League matches

There is only one game left – the final contest scheduled at May 26th, 2018 – and we are expecting this event to be even more spectacular and challenging than all the previous matches. It will be conducted at the Olimpiyskiy Stadium in the capital of Ukraine. As for the previous Champions League dates, they are still worth mentioning, as they reflect to a large extent the opportunities of the two teams that will meet in the crucial game. And we are ready to discuss these matches.
Traditionally, there are 8 groups, from A to H, in the tournament, and the teams meet with each other in a series of double-round robins. This season, the group stage started on September 12th and finished at the beginning of December 2017. According to the UEFA Champions League fixtures, this year’s finalist Real Madrid had to face the German players from Borussia Dortmund and the English Tottenham footballers in Group H. As for the second contender for the trophy, Liverpool, it was included in Group E, where its rivals were Sevilla, Spartak Moscow, and Maribor.
The Champions League draw for the last 16 was conducted in December 2017. On the basis of its results, Real Madrid met with the French club Paris Saint-Germain, while Barcelona played against Chelsea. The Spanish sportsmen secured the upper hand against their English rivals. In accordance with the Champions League schedule, the second contender for the title of the champion was matched with the Portuguese player Porto and easily swept past this contestant. The Spanish athletes from Sevilla got a surprisingly easy win against Manchester United, which seemed to be one of the most promising members of the championship.
Thus, the Champions League results were as follows: at the quarter-finals, Real Madrid defeated Juventus with an aggregate score of 3-4, Bayern Munich beat Sevilla at 1-2, and Liverpool beat Man City at 5-1. The matches between Barcelona and Roma finished in 4-1 and 0-3, but, in accordance with the Champions League scores, the latter was considered the winner by away goals. The semi-final of this tournament was drawn on April 13th 2018. Real Madrid was matched with Bayern Munich, and the game finished with a score of 3-4. The match between Liverpool and Roma was even more challenging, but finally the British managed to gain the upper hand at an aggregate score of 7-6. This is the way we’ve come to the Champions League final, which is expected to be really exciting and unpredictable. The thing is that both of the teams are very strong and deserving the victory. 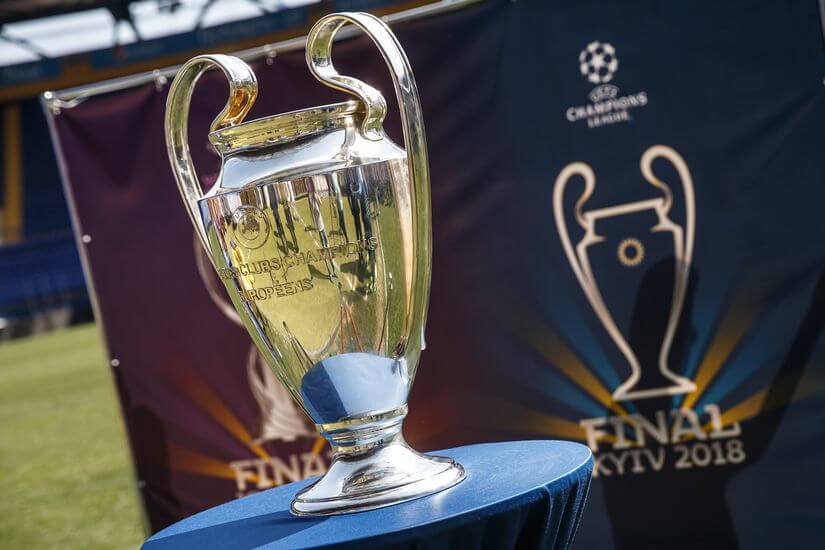 Most experts agree that the fight in Kiev will be hard and thrilling at times. The point is that Los Blancos are anxious to get their 4th Champions League title over the past five years, while their British rivals are in a serious mood to take the main football trophy to the capital of the UK. The Champions League odds are as follows: Real Madrid is estimated by most bookmakers at odds of 8/11, and Liverpool is offered at 11/10.
Taking statistical data into account, many specialists predict that Jurgen Klopp’s men will break the match open. They seem to be more fast-paced, which, however, doesn’t really shape the destiny of the Champions League final date. We remember that the English players beat Roma at an aggregate score of 7-6, and their last goal was scored in the final seconds of the game. It’s hard to say whether the athletes were tired or their contestant was so much strong, but the fact is that the semi-final game was really hard for Liverpool. You should remember it while placing your UEFA Champions League final bets.
The Spanish side, at the same time, had many troubles reaching the final, too. After the thrilling 2-2 draw against Bayern Munich at the home game, the sportsmen seemed to be excited and distressed. They had a very busy schedule ahead of the Champions League fixtures in Ukraine, and many fans wonder if they are too tired to go on fighting. However, their enemies, the British footballers, had to work no less hard before the final game of the contest, so their chances of success are almost equal.
If you want to win big with your Champions League betting, try to analyze the way these two clubs showed themselves during their previous tournaments. Real Madrid, for instance, has already become the winner of the crucial match for 12 times, which is a very impressive achievement for any football club. Liverpool, the Spanish players’ major rival based on the Champions League schedule, has more modest achievements: the team was the championship’s hero only five times, and this year’s game will be its 13th final in UEFA seasonal events.
We’d also like to mention that as the Champions League final date approaches, the odds for the two players are changing from day to day. William Hill, for instance, prices the British club at 21/10 to win, while Ladbrokes offers 5/4 for the Spanish players. And we won’t be surprised, if tomorrow the same bookies provide absolutely different figures for the same players. Eventually, UEFA Champions League final will show us which of the clubs deserves more money, respect, and attention. And we, in our turn, will try our luck with our football betting, which is no less exciting than watching the match.